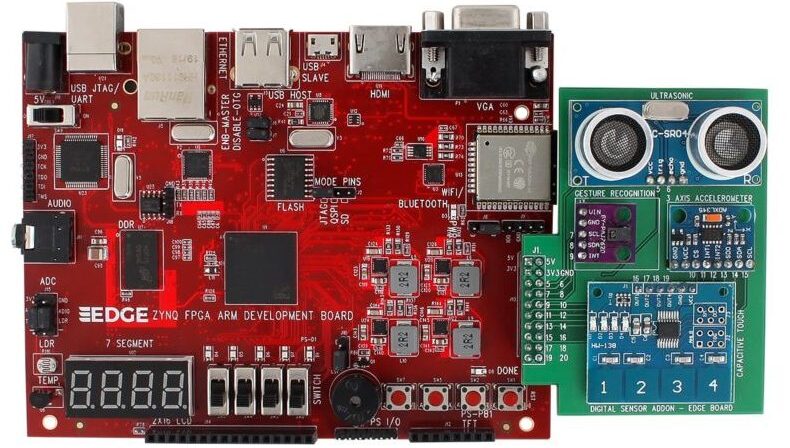 Advantages are the sensor data can be accessed in the cloud by using Wifi module available on EDGE FPGA kits. Also helpful in lot of device control application from the sensor data.

Accelerometer measures angle at which the sensor is tiltled with respect to the earth gravity. The accelerometors are used in wide range of applications like cell phone, Navigation devices, Pedometer, Gaming, Robotics and so on.

Digital Sensor addon card features Analog Devices ADXL345, 3-axis accelerometer with high resolution (13-bit) measurement at up to ±16 g. Digital output data is formatted as 16-bit twos complement and is accessible through either a SPI or I2C digital interface.

Example code provided for ADXL345 communicates with FPGA master via SPI communication.Read the Accelerometer output and display it on the 2×16 LCD.

Ultrasonic Sensor measure distance of an object by sending ultrasonic sound. It uses a transducer to send and receive ultrasonic pulses to know the odject proximity.

Ultrasonic wave frequency are higher than the human audible range. Single transducer send the pulse and to receive the echo.  The sensor determines the distance to a target by measuring time lapses between the sending and receiving of the ultrasonic pulse.

4 Channel Capacitive Touch Sesnor Module uses the touch-sensing IC TTP224 to sense the touch input thus making it easy to add capacitive touch input to your project. When a capacitive load (such as a human hand) is in close proximity to the sense-pad, the sensor detects the change in capacitance and activates the switch.

Digital Sensor Addon can be purchased on the following products page. Best Rated and All in One FPGA kit to work with Latest Xilinx Vivado Design Suite. About Us
Invent Logics is the manufacturers of high-quality and low-cost EDGE FPGA development Boards. EDGE FPGA kits are the feature-rich development board with the best documentation support. We aim to offer the best FPGA learning platform to students, research scholars, and young engineers.

Get Notified on New Products and Tutorials!

Chat with us for queries on the EDGE FPGA kit